Last week I said there was escarole in the CSA Box. I was wrong. There were two kinds of endive, but no escarole. This week there will be escarole! I always say, “Chop it all up and make a salad.” Or, to go “Weird Al” Yankovic on you, “Just Eat IT!” However, I understand some CSA Members like to put a name on each veggie they eat, so perhaps this photo will help.

You will have two different varieties of endive again this week. The variety on the left is significantly larger in size, but has the same “jagged” leaves as the smaller variety on the right which we have grown in the past. 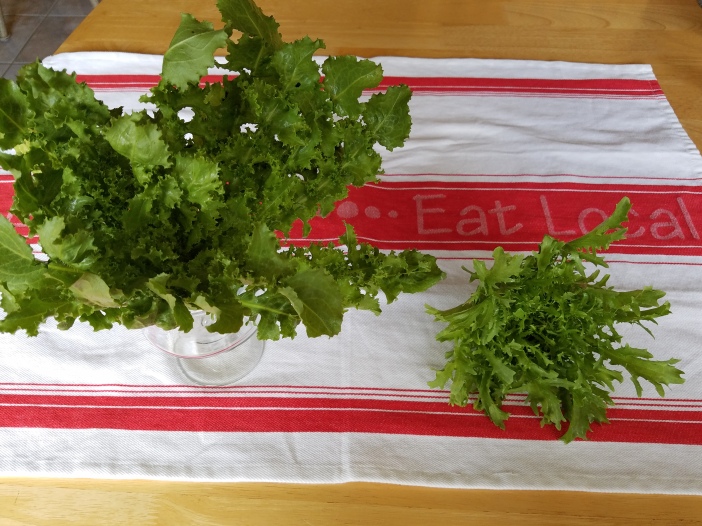 In your veggie box this week look for green and purple kohlrabi, red lettuce, romaine,  two varieties of escarole, endive, onions, snow peas and the first zucchini and patty pan squash. Of course, on any given day, the contents could vary slightly due to harvest decisions.

There will be just a couple of the zucchini and squash to start, but we trust we will have you saying “UNCLE” by the end of the season! The zucchini come in green and yellow. The summer squash consist of ten varieties of patty pan squash. Also, we are growing some yellow straight-neck summer squash this summer; however, the rain did kill many of the straight-neck plants as they were in a low area. Like all veggies, squash and zucchini being slowly and grow to a crescendo.